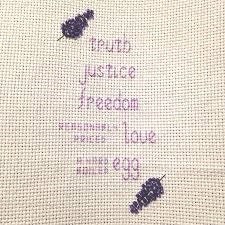 If you have to ask, you weren't there. The 25th of May has become the unofficial Discworld Day/Terry Pratchett Day for Discworld fans around the globe. 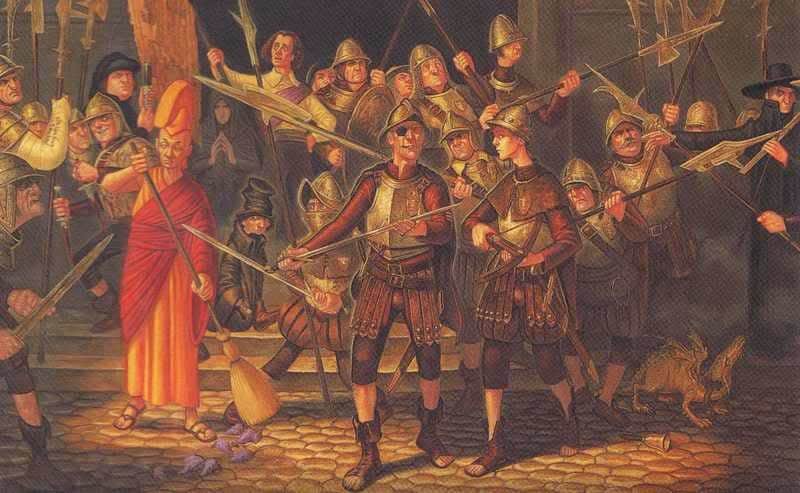 The date comes  from the novel Night Watch.  In my honest opinion, this is the greatest  novel in the Discworld series, and probably the best book I have ever  read.  By Night Watch, Terry has sorted out the rules of his world, and  is sticking to them fairly faithfully - the rules about how magic works  on the Disc, how the society is structure, the politics and policies,  what a dwarf/troll/human/vampire/werewolf/gnome/pixie/wizard/witch is  and how they interact/relate to everyone else.  Ankh-Morpork has a more  concrete map and you feel like you are living in the city.  There is a  history to the world, the city, the characters that is faithfully  followed.  There are people who live in Ankh-Morpork, who work in  Ankh-Morpork, and who reappear in novels set in the city.  In Night  Watch we as a reader are able to invest fully in the story, because we  aren't trying to work out how everything else on the Disc is supposed to  work.  More than that, in Night Watch we are finally able to discover  the history of a lot of our favourite characters: how CMOT Dibbler got  his name, how Sam Vimes became the policeman he was destined to be, what  a young Vetinari was like, why Nobbs.  Lu-Tze even makes an appearance.   There's time travel, adventure, crime, war (sort of), magic, mystery,  torture, coming-of-age, obligatory father figure.  Basically everything  you could want in a sci-fi/fantasy novel. Even dragons (albeit small  ones you can light cigarettes with) When asked about the book's "darker" themes, Pratchett said:

"A  dark book, a truly dark book, is one where there is no light at the end  of the tunnel. Where things start off going bad and carry on getting  badder before they get worse and then it's all over. I am kind of  puzzled by the suggestion that it is dark. Things end up, shall we say,  at least no worse than they were when they started... and that seems far  from dark to me. The fact that it deals with some rather grim things  is, I think, a different matter."

Back to the  25th May.  The 25th May was the date of the great rebellion against the  political leader of the time. The People (more dangerous than ordinary  people) decided they were sick of the tyrannical rule and corrupt  police/torturers and rebelled, forming The Glorious People's Republic of Treacle Mine Road.   They fought for Truth.  For Justice.  For Reasonably-priced Love  (seamstresses will not fight for free love).  And for a Hard Boiled Egg. They wore the lilac and sang dirty songs about angels rising up.

My gift to you on this glorious 25th May is a free pattern, a memory to the Glorious People's Republic of Treacle Mine Road.

I hope the picture appears okay! You should be able to click on it for a larger version.  Otherwise, if you message me I can send you the PDF version. The colours are  DMC 209 and DMC 310. The French knots can either be French knots with  DMC209, or seed beads. French knots come up better in the program I use  than beads, but I prefer using beads.  I used Mill Hill 2085 but I'm not  sure if they're available any more.  Why not try Mill Hill petite  40252.  Or any other purple beads you have lying around!  On 14 count  aida, it will fit a standard 4x6" picture frame. 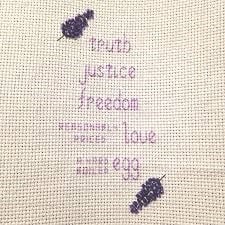 I ran out of  time tonight so only stitched two of the lilac branches, which looks  pretty good too (I'm the worst person for following patterns, even my  own!).

Happy Stitching and fight on! 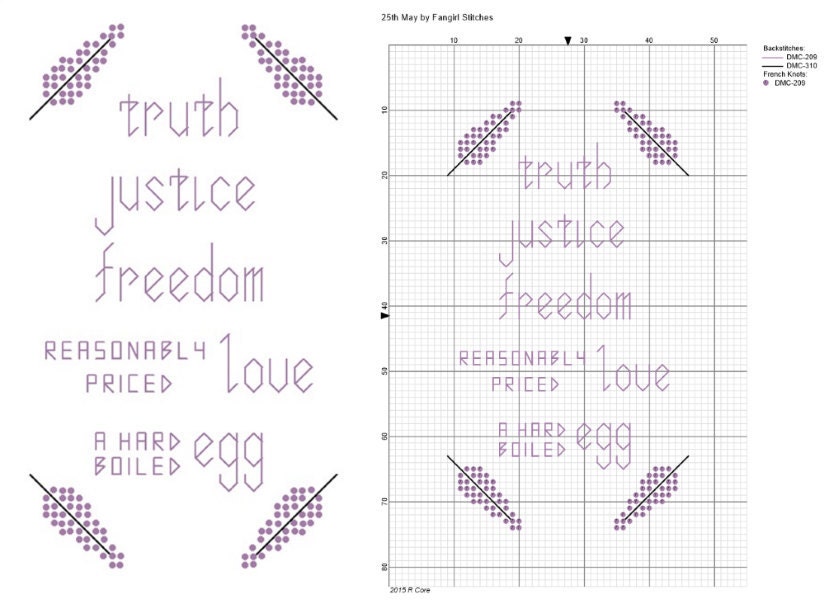